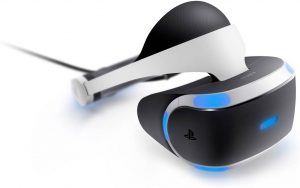 The PlayStation VR can be connected to a PlayStation 4 console via USB connection and HDMI. It tracks motion and movement through a gyroscope, an accelerometer, and the PlayStation Eye tracking system.

It is less expensive than the Oculus Rift and the HTC Vive. 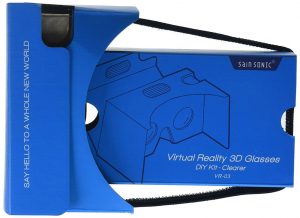 The SainSonic VR-03 is a budget headset that costs less than $10. It is the cheapest on this list. It is available in black, blue and red. It is compatible with both iOS and Android devices. With this inexpensive headset, anyone using a smartphone from almost any major manufacturer can enjoy virtual reality at a low-cost price.

The SainSonic VR-03 is a virtual reality headset that is made of cardboard. The design is quite similar to the Google Cardboard. It comes with two biconvex lenses with a 50mm adjustable focal length that can transform 2D images to immersive 3D images. The SainSonic VR-03 is a precision machine cut headset with numbered parts that can be assembled within minutes. It is strong and sturdy even though it is made of cardboard. It is also lightweight, weighing less than one ounce.

The headset has a magnetic clicker by the side that allows users to navigate through VR applications. There is a forehead cover attached that prevent sweat and oil on the forehead from touching the device. There is an elastic band for attaching the SainSonic VR-03 to the head.

A lot of people bought this device due to how affordable it is. But there have been complaints about its comfortability. If used for too long, users may experience eye strain as the smartphone may be placed too close to the eyes for too long. 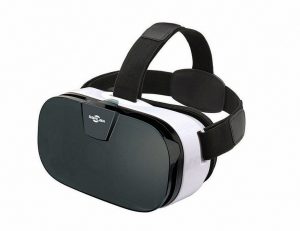 This is a good entry level VR headset that is great for human comfort and has a great ergonomic design. The elastic band fits perfectly around the head without being uncomfortable. Users might complain about the lack of content and the seeming incompatibility of YouTube with this VR headset. 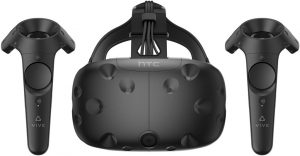 The HTC Vive is the best virtual reality headset that you can buy. It comes with an OLED display with 2160 x 1200 resolution and a refresh rate of 90 Hz. The display has a 110⁰ field of view, so your peripheral vision is covered. It uses 32 headset sensors to give it precision tracking with 360⁰ motion tracking. Thanks to these sensors, the HTC Vive can pick up every little movement.

The HTC Vive has been widely acclaimed to be the best virtual reality headset available. It comes with Steam software that has over 60 games included. And more games are added to the ones already available. The downsides of the HTC Vive are the need for a powerful PC, the weight and the costly price. But regardless of this, it provides the best virtual reality experience. 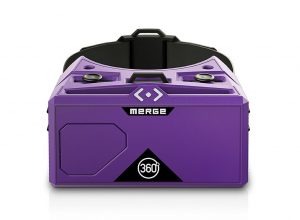 The Merge VR headset is a durable headset with a good controller input. A lot of VR headsets only come with one button by the side, and many of them require you to purchase an extra Bluetooth controller. But the Merge VR comes with dual touch inputs that can be used for navigation and full control when playing games. The left and right buttons can be used for turning left and right or jumping and running.

The Merge VR is made with flexible, soft, long-lasting, lightweight foam. The foam is tough to handle drops, but it is still comfortable on the face. It comes in a stylish purple color. It’s hard to find VR headsets as stylish as it.

The Merge VR is compatible with most iOS and Android smartphones from 2014 upwards. It comes with the Merge Start which is a portal that offers users of the Merge VR access to apps, videos, games and a lot of content. Users will enjoy the range of videos and apps that Merge Start has to offer.